Note: This article was originally published on May 19, 2020. The information provided in this article does not, and is not intended to, constitute as legal advice.

So, in case you haven’t kept up with Jay-Z’s latest legal battle, we’ll recap it for you.

Essentially, the legendary Jay-Z asserted that an individual who impersonated his voice with the use of A.I. on YouTube videos has infringed his copyright. Rightfully so, Jay-Z wants to make sure that it stops. That individual used A.I. to impersonate Jay- Z’s voice without Jay’s permission (this is commonly known as “deepfakes”). Jay-Z simply just isn’t with it. “I got 99 problems but a deepfake ain’t one.”

At first, we wanted to embed the videos into this article so that you can all see what we’re talking about. However, we felt that was counter-intuitive. Jay-Z is seeking the removal of those YouTube videos. Therefore, we don’t want to recirculate it.

We understand that many people have opinions as to why Jay-Z’s copyright infringement claim holds no water. For example, it may be argued that the purposes of those videos were solely for entertainment and for non-commercial use (i.e. parody, satire). However, it’s hard to prove the creator’s intent behind the videos. This is a dangerous game to play if we’re not careful because it will undeniably affect the future of music. Deepfakes can be very problematic and harmful. It’s a slippery slope for all artists and their protected rights (i.e. right of publicity, privacy, name and likeness). We agree with Roc Nation’s argument that these videos “unlawfully use an A.I. to impersonate our client’s voice.” We’ll explain why, keep reading.

Here are some arguments that support why Roc Nation LLC and Jay-Z have a strong case:

Is it Fair Use?

No, it’s not. “Fair use is a legal doctrine that promotes freedom of expression by permitting the unlicensed use of copyright-protected works in certain circumstances” (107. Limitations on exclusive rights: Fair use). Click here for more info.

An argument exists that these YouTube videos should be considered as derivative works and therefore protected under Fair Use. However, we’re going to argue that they should not be protected by Fair Use.

Under copyright, a derivative work is a completely new work that incorporates copyrighted work that already exists. In order to constitute as new work, it has to transform or modify the original work in some creative way. There are four factors to be considered in measuring Fair Use (Section 107 of the Copyright Act).

(1) The purpose and character of the use.

Although it can be argued that the creator did not have the intent to monetize off of his videos, the argument can easily be made that he could receive monetary benefits from these videos. When you upload a video on YouTube, there is an opportunity for the creator to make profits from views and advertising. There are also other possible ways that could eventually lead to streams of income that connect back to the videos.

It can also be argued that the creator intended the videos to be used for research or for other non-for-profit educational purposes, making it “transformative.” However, it appears that the creator is not using these videos for the advancement of science, nor are the videos subject to peer review.

In addition, these videos should not automatically be considered as parodies simply because it uses technology to use Jay-Z’s voice as if he were reading Shakespeare. 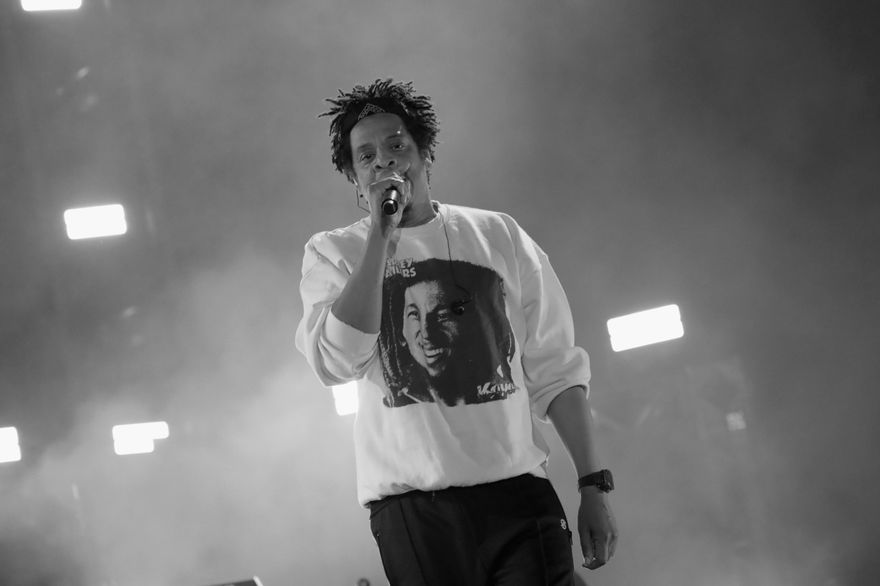 (2) The nature of the copyrighted work.

Rather than using an existing audio (i.e. a sample) from a real Jay-Z song or interview, the creator instead used artificial intelligence to impersonate Jay-Z’s voice. Let’s say the creator made the video for entertainment, but even if that is the case, the other prongs are less likely to support the creator’s position.

(3) The amount and substantiality of the portion taken.

It may be argued that the creator didn’t copy from the original work because he created something completely new with the A.I. However, the A.I. mirrored Jay-Z’s voice “down to the T” in such a way that it sounds just like the real Jay-Z. Therefore, the substance and essence of Jay-Z’s likeness has been taken. This lacks any originality when it comes to Jay-Z’s voice. Just like a great impersonator, the A.I. was able to take the most unique and substantial aspect of Jay-Z’s voice, including: his tone, pitch, and volume. They were eerily identical.

If this is allowed, it could be potentially dangerous for the future of music. Imagine what else could possibly happen. Imagine if artificial intelligence can create the voice of someone and use it for any purpose. What’s next?

(4) The effect of the use upon the potential market.

The potential negative impact that this can have on the market is real. The use of the generated A.I. voice deprives the real Jay-Z and Roc Nation from potential income. Jay-Z is a mogul and has worked extremely hard for his image and reputation. He is a pillar in Hip-Hop. Any unconsented use of his voice will undoubtedly negatively affect him. However, it won’t only affect Jay-Z. This will also affect other artists and the music industry as a whole, negatively impacting the entertainment industry. This can lead to A.I. even replacing artists entirely in the future. This may sound extreme now, but you never know what can happen when you give the green light to things that are fundamentally questionable.

The creator can argue that he is not negatively impacting Jay-Z and Roc Nation’s potential profits. The point is this: who knows where this kind of technology is heading and how it could be used in the future. The argument could be made that Jay-Z’s voice, that was generated by A.I., is depriving the real Jay-Z from this potential market. For example, let’s think of a hypothetical. Let’s say that a movie producer wants to use Jay- Z’s voice in an animated film, but for whatever reason, Jay-Z cannot do the voiceover at that time. So, the producer uses A.I. technology to generate his voice instead without his permission. This deprives Jay-Z the opportunity to license his voice in this potential market. This is completely unfair.

This also causes huge problems regarding Jay-Z’s likeness and image. If people were to use A.I. to create works without the consent of the artists, then this can lead to the brand of the artists being tarnished. Imagine, watching tv and you see a commercial using Jay-Z’s voice to sponsor the product. The company did not get consent from Jay- Z, rather they used A.I. This is false advertising. This has a negative impact on Jay-Z. It ruins the partnerships and other business relationships that Jay-Z is associated with. Additionally, fans will be confused too. Perhaps, Jay-Z does not want his voice to be used for certain statements. He should have a say on that! It can change the public’s perception and reality of Jay-Z. It will make the world question what’s real and what’s not.

After all, Jay-Z said: “The responsibility is to keep pushing it forward, and not relying on the same old gimmicks. You have to push it forward.” While we should push it forward, we have to be careful that forward isn’t based on a false perception created by A.I. We have to make sure that we’re actually moving forward and not destroying what others have worked so hard to create. We believe that copyright infringement occurred and, if the court rules otherwise, it will create a slippery slope for the music industry as a whole, including music professionals who have worked very hard to build their brand. They deserve their credit and all of their rights protected. When it comes to this case, we are team Roc Nation all the way.

French Montana On Drake/Ye, Recovery, Drake Feature On Album, Verzuz + 'They Got Amnesia'

You Can Now Find the Lyrics to Your Favorite Songs in Spotify. Here’s How.